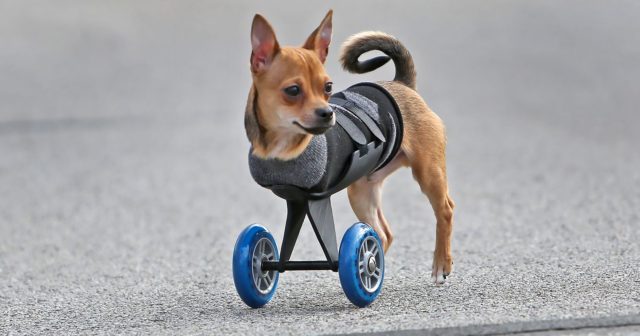 But unlike other dogs who are famous because of their funny videos or cute appearance, this dog has been inspiring a lot of dog lovers because of his rather disadvantaged which turned out to be a blessing.

Turbo, a chihuahua, was born with only two legs on the back part of his body.

Turbo’s owner, Ashely Looper, first met the chihuahua in her previous work at a local veterinary clinic in Indianapolis, where the original owner gave the dog and refused to keep him because of his condition.

Then six weeks old, Turbo immediately caught the eye of Looper. According to Looper, it was love at first sight as she describes Turbo as ‘tiny, cute, and small.’

To make do with Turbo’s condition, Looper tried a lot of do-it-yourself (DIY) carts to guide Turbo to lead a normal dog life. Looper said it was a hard shot, but she wants to try anyway.

Turbo’s first cart was made from an old helicopter toy, Looper shared. But since Turbo is a hard-headed dog, he just sat around the cart and did nothing.

??Hey girl. Are your paws tired? Because you?ve been running through my mind all day?? What?s your favorite pickup line?

The chihuahua’s story went viral online when Looper uploaded a video of him playing around his new cart. The video reached a San Diego-based aerospace engineer, who then made roller-blade wheels specifically designed for Turbo.

Upon receiving the roller-blade wheels, Turbo did not grasp how it should be used. Thankfully, when Looper brought out her other dog which is a bulldog, Turbo immediately ran as fast as he could with the roller-blade as his guide.

It was a feel-good experience not only for Turbo but also for his owner Looper, who admitted that she was happy to see her dog finally learning to embrace whatever condition he has.

Check out some of his cute videos here:

#RollCall ? Where are you from? We love seeing how far we have inspired people around the world! We are from Speedway, IN USA! ????

Thank you designboom.com for sharing this story.