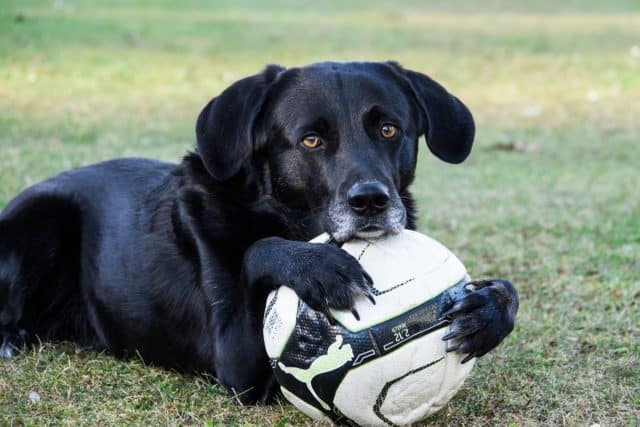 Dogs are such fun animals. They’re intelligent enough to understand and follow commands from their owners, and they also have different personalities.

There is one thing common among dogs. They love to play. They can go for hours playing with its owner and will seem like they never tire.

In fact, whenever my dog and I go to the park to play fetch, he goes to random strangers with the ball in mouth trying to get them to throw the ball for him. He does this in such a cute way that the people he asks don’t mind it at all.

And as dog owners, we all know how naughty they can get if they get bored. Which is why we try to make them spend as much energy as they can by exercising them through walking or through playing.

So, what if we’re not home to entertain our pets?

One dog found the answer to this. A dog found a way to play fetch by himself by using a trampoline.

Bear is a Labrador, which we all know is an energetic dog breed. They need exercise to release all that energy and Bear is no exception.

What Bear did was nothing short of a genius for a dog. He wanted to play fetch, but no one was around, so he placed his ball on the trampoline, went under it and bounced the ball with his nose from underneath.

We all know what happened next. The ball did bounce off, and Bear went chasing after it.

When he got the ball, he repeated the process.

Bear found a great way to entertain himself when his human family isn’t around to play fetch with him. Although the trampoline may not dole out treats as his human family does, it still does the job of entertaining him to ease his boredom.

Here’s a video below showing Bear and his great idea on how to entertain himself without his human playmates.