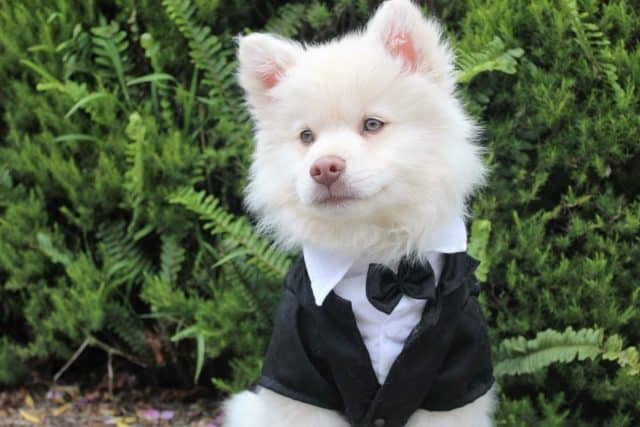 Wedding days are special for couples who have finally decided to tie the knot. It’s a day that a lot of people prepare extensively for. To make the day extra special couples assign different roles to different family members.

Some become the best man or bridesmaid. Kids are asked to be the ring bearer or the one who brings the ring to the altar. However, there is no rule saying that a dog can’t play the parts mentioned above. It totally depends on who is getting married and how much importance they put to their dog.

This particular couple decided they wanted to be different. Instead of a person, they made a Goldendoodle become the ring bearer. The dog was dressed to impress. They had a custom fit suit made just for the pup. There was no mistaking that this particular pooch could play the part properly.

The couple even took it to the next level by adding a prop. If you thought that the dog is just simply going to walk and deliver the ring, you’re mistaken. He rode down the aisle in a small doggy sized car.

It’s a particularly short video, but it captures the moment perfectly. It also captures the feeling of excitement of the surrounding audience. This fifteen-second video shows the Goldendoodle being carried by a remote-controlled car. The look on its face and the way it looks around suggest confusion.

However, it doesn’t seem to mind riding around a car. The body language suggests fascination towards the transpiring event. The groom is waiting at the end to take the ring from the dog. The groom has a big smile on his face. Everyone else that’s looking at the cute dog is smiling as well.

This is an unforgettable event for the couple. We hope the dog remembers this event too. The internet will surely remember.